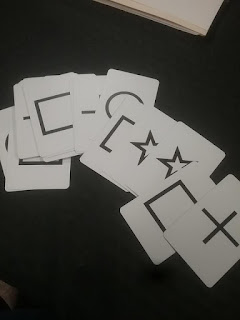 Okay strange game mechanics idea. Thinking of using them for my Silent Hill style game where you have three stats. Fight, Flee and Think. They are ranked from one to five.

In front of each player is a picture of the four symbols from the Zener psychic testing cards. Whenever you have to make a stat test you place a marker on one symbol of your choosing. Then you pull a number of cards from the top of the Zener deck equal to the stats rank. If you match the symbol you marked then it's a success. If you match twice it's a critical success. If you get no matches then it's a failure.

Add in some kind of fear or stress mechanic and if it's triggered when you score a failure on a test then it becomes a major failure. Of course a super simple wound/impairment tracker in there as well. Plus some dark secret type things to help you build what kind of encounters the group will have.

The idea would be for small groups of players, Maybe like three at max. Anyways this is what I've been thinking on tonight.