Jaded Gamer Diary - the latest undercurrent in the hobby

Well there is a new undercurrent going through the social media aspect of the hobby right now. This time it boils down to "Don't do anything for fun, only for money".  While this may seem rather harmless on the surface there are people throwing some dislike towards anybody who offers up content for free. Claiming they are the reason for the problem of low wages in the gaming industry.

This comes right on the tail end of the undercurrent in which people were trying to shame poor gamers out of the hobby. That was all started because some people said a hundred dollar pdf product was way out of their range to afford. People flipped their shit and suddenly poor gamers were the reason for every problem including piracy and low pay.

So what this really looks like is some folks stepped back and rethought up a different angle to go after us no good poor folks.  Guess they figure by shaming people out of producing free material because it's what they love to do then the poor gamers will all leave as well.

I really don't buy into the 'movements' that are basically people telling others what to do. Then giving them a hard time when they don't want to change. It's a hobby and a passion for some. You want better pay, then start up a project and set an example by paying people better yourself.  Leave those who are happy in their little corner of the hobby giving away their ideas alone.

Posted by PeterAmthor at 5:56 PM No comments:

Well Mike Mearls is starting to crawl out from underneath the rock he has been hiding under. For those that don't know he is the guy who hired Zak Smith/Zak Sabbath on as a consultant for DnD 5e. Despite many warning about Zak being an abusive and stalkerish pile of shit, he claimed to have investigated Zak and found nothing wrong. Then handed over the info on the abuse victims who tried to warn him to the abuser. Then when shit hit the fan he said Zak was nothing more than an early playtester, yadda yadda yadda and a bunch of other bullshit. He then quickly vanished from social media.

Now he's slowly creeping his slimy little toes back out to test the water. Did a podcast interview and has been quietly popping back up here and there.

I pretty much lump him into a big group of abuse enablers that helped Zak make other miserable for years on end. Companies like Magpie Games, LotFP and people like Satine Phoenix and Mike Mearls, all birds of a feather who well sell out others for a moment of popularity or to make a fast buck. They don't care what happens to anybody but themselves.

So when I see him crawling out I'm not staying silent. Whatever social media I run across him at I'll be sure to ask him about his past actions. Others should be doing the same.

Posted by PeterAmthor at 11:47 AM No comments:

Well apparently Zak Smith/Zak Sabbath is still not done being an asshole in the gaming community. This bag of shit just keeps on floating back up like the turd that he is instead of going down the drain. Here is the latest from the comments page on a Kickstarter for a game he is releasing. 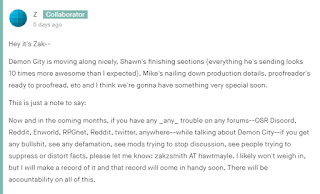 Yeah you read that right. He's now asking for help in making a list for all the people who say anything bad about him with the oncoming release for his game. You know who does shit like that? Scumbag bullies who want to control others and silence them with fear. Good luck with that. We have all been putting up with your crap for years and basically everyone is sick and tired of you. Your shields have left you and told everyone what kind of person you are and your new shields just aren't stopping anybody.

But he keeps on talking.

Now he's trying to use his typical tactics and make everyone else look like the villain. To bad for his ass nobody is going to listen to him.  He's the kind of person that needs to be kept as far away as possible.


Posted by PeterAmthor at 1:35 PM No comments: