A thread over on rpgnet got me thinking about the old 'death spiral' in gaming again. They were talking a lot about using the 'reverse death spiral' where the characters get bonuses, instead of penalties, as they get near death. Basically the character is fighting harder to try and stay alive, the adrenaline is really pumping and their motivation is growing.

One person even mentioned wounds as armor. Which I sort of used in my old freeform system I made once upon a time. In my system there were different levels of wounds once one of the lower damage levels got filled up it took bigger hits to hurt the character. You could also use a flat increase to the armor type or whatever, depending upon the system.


One issue that got brought up with the reverse death spiral is that players may start keeping their players 'on edge' or constantly wounded. Never using that healing potion, lower level healing spells, etc, just to constantly get the bonus. It was pointed out this was done in the City of Heroes MMORPG with one of their classes turning them into a 'walking wounded' class.


My solution for it was this. The bonuses are only in affect during the fight in which the damage was taken. Once that fight is over the adrenaline stops flowing, the aches really begin and the blood loss starts to build up. So they are back to no bonus for the next encounter and maybe only a few hit points left so not much of a chance to build a bonus then. Therefore it becomes important to keep healed up between fights.


Heck you could even turn the reverse into a normal death spiral after the fight. Which is what I would most likely do.
Posted by PeterAmthor at 7:05 PM 2 comments: 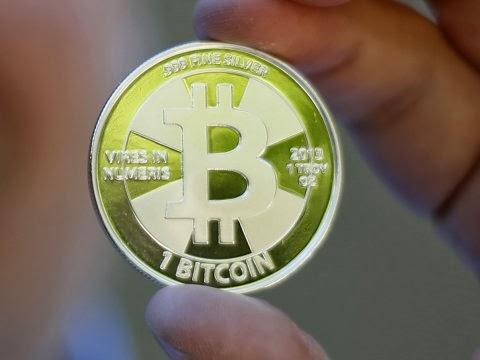 First off lets take a look at the downside of the Bitcoin.  In the form of disappearing exchanges and Bitcoin 'banks'.  See the problem with having a virtual currency without any real backing is that the 'banks' for this currency really don't have any real backing as well.  So if you're not careful all your coins just up and go poof.

Then on to the creepy side.  We all know cybersex is a big thing in various areas of the net.  Now somebody in Japan (really is that a surprise?) has taken it to a whole new level.  Using the Oculus Rift they are taking the VR Tenga where all the perverts knew it was going.  Yes this thing even has a robotic hand attachment for... well... just go read the article and watch the video if you dare.

Now we also have DRONES!  I think I could start up a 'drone saturday' article series on these.  This time I link to a site that lists even more links.  Called the 'covert drone war' you can find all the latest in news about the darker side of the use of drones.  From innocent civilians being killed, faulty equipment and more.

So it was weekly this time around.  Hopefully I get enough for another next week.

Posted by PeterAmthor at 5:31 PM No comments: 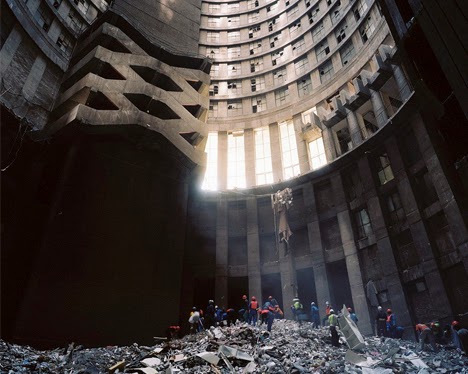 First up this week is a tower of urban decay.  Johannesburg Africa, where one of the tallest ever attempts at a residential skyscraper sits and slowly falls into ruin.  All sorts of restarts, false starts and stoppages have plagued this building.  An awesome sight of what could have easily doubled for a block in Judge Dredd.

The wealthy have few limits on building their homes.  Now we are seeing a new trend of urban palaces sprouting up in New York.  Where the rich will buy buildings and turn them into their own personal living space in the middle of dense urban sprawl.  How long before parts of the city become filled with these?

NYTimes: Palaces in the making.

Stylin' and profilin'.  A friend over on Facebook sent me this link.  So now the sharp dressed executive can rest more assured that their clothing can be made bulletproof.  Carbon nano-tube technology mixes with upper class style.  Nice to know that the rich and well off can afford this....

This time I'll end with a link to a project over on Indiegogo that could use a little bit of attention.  GloSpex make glasses that emit light out in one direction, giving you that glowing lens without burning out your retinas.  I've got two sets of the first generation run of their original design and they are pretty sweet.  A bit rough around the edges but as a first gen that is expected.  I'm sure these will be of a much higher quality.  Go give them a bit of support.

See you in two weeks.  Maybe one if I stumble across enough articles.

Posted by PeterAmthor at 2:18 PM No comments: 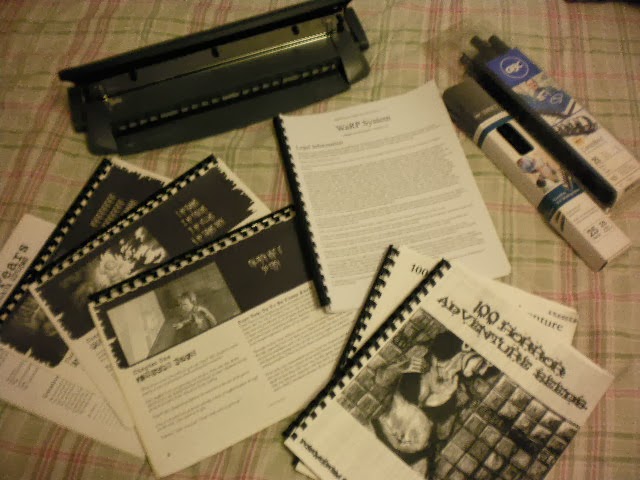 Probably one of the better investments I've made over the years. A Combind for spiral binding game stuff. Bound up several printed off books, adventures and what not.  Also been toying with the idea of producing a small 25 to 35 page game book and selling it in this format.  Crank it out at home, old school indie publishing style (original definition of indie not the bullshit forge version).  Or even trying to start up Inner Voice in this manner as a black and white zine.
As for the picture on the left is the Little Fears Nightmare Edition playtest stuff from several years back. I put it into three sections for easier r...eference when I was doing the playtest for Jason L Blair.
Little Fears Nightmare Edition
Bottom right is 100 Horror Adventure Seeds from Postmortem Studies done up in two sections as I didn't have the bigger binder strips at the time.  Got some use out of it even before I bound it up
100 Horror Adventure Seeds
Then finally there in the center is the WaRP SRD that I've been flipping through a lot lately while working on my game. I've gotten more done up like this but they are in boxes in storage at the moment.
Anybody else bind up their stuff like this?

Posted by PeterAmthor at 3:21 PM No comments: