Mana Screwed - A Saga that can cause a stir

One of the new card types from Dominaria will be Saga's.  They come into play and create an effect, then after each of your next two draw steps it does an additional effect before being sacrificed.  Some aren't all the great, some are more Lore than anything else. However this one has caught my eye. 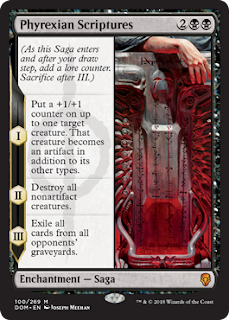 Being a big fan of artifact decks this will be going into the next one I build.  Usually most of the creatures I run in those decks are already artifact creatures.  But decks like that aren't super common and tend to have a slow build along with a weakened sorcery/instant game.  However this changes that up a bit.  A creature wipe for only four mana that, if you build a deck right, won't affect you at all.  On top of that it cleans out your opponents graveyards on it's farewell... but not yours.  Not to mention that graveyard cleanse is only one turn after the wipe so it limits how many cards a player can save. For the price you pay it is well worth it.

Of course other artifact creature heavy decks won't be affected except by the graveyard flush.  But honestly you don't really see people playing many of those.  So honestly for me I see this as more useful than Urza's Ruinous Blast.  Now if only it wiped Planeswalkers as well....

Posted by PeterAmthor at 2:00 PM No comments:

With Dominaria comes a few cards that change things around a bit.  This is a board wipe that does just that. 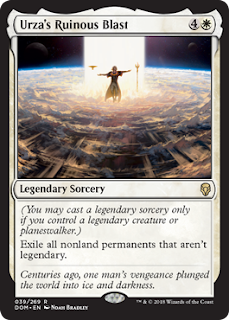 While I do like this card there are some limitations to it that any player needs to be aware of.  Especially in the first few months following it's release.

Mainly Dominaria is a legendary heavy set, really heavy.  So that means most people will be loading their decks up with them.  Thereby limiting the damage this card can do.  I mean if you are running all legendary stuff it does cut down how bad your board wipe can hurt yourself but if everyone has stacked their decks the same.  It just won't do much good over all.

My advice would be if you see people starting to do this very thing then you need to change up tactics really quickly. *cough*sideboard*cough*  Toss in some old fashioned board wipes that don't care about the legendary status along with a few cards to help you recover from the wipe.  So when people are popping of Ruinous Blast and doing next to nothing you are taking them to the cleaners.

But this card is obviously useful.  Either to start with and switch out when it's not viable or to keep in your sideboard for when you go up against the guy who is legendary light.

Posted by PeterAmthor at 2:19 PM No comments:

Mana Screwed - the new Mox is not so Mox

With the new expansion for Magic ramping up a lot of excitement with the return to it's original world people have been jumping at all the spoilers and leaks.  I'll admit that I have as well.  But sometimes I don't think the cards people are raving about are really all that special.

Take for instance the Mox Amber. 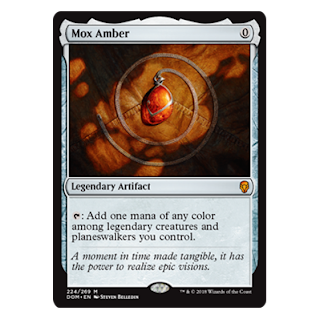 While I'll admit it is a useful card people are freaking out about it being an all new Mox.  When really, it isn't.  It has that casting cost that made the original Mox cards really popular but unlike those of old this one is absolutely useless on the first couple of turns.  Which was pretty much what everybody loved about the originals when the game first came out.  First turn you had the chance to draw up a Mox or two and drop them in addition to a basic land and start pumping out mana faster than you opponent could.

This one absolutely does not do that.  It can be dropped on the first turn BUT it can't produce any mana until you get a legendary creature or planeswalker out on the battlefield.  Most of which cost more than a couple mana.  Later in play it can become useful as a generator for different colors but it is also weakened by the fact that a board wipe taking out creatures could render it, yet again, useless.  Especially with more and more cards targeting planeswalkers.

Now if I get one I'll use it (or sell it if the price gets stupid high on it for some reason) but I don't see it becoming a stable in many of my decks.  Maybe those with a lot of legendaries or in Commander deck or two.  I'm not sure how many people will be making it a staple once the new and excitement wears off.

Just my two cents.  Your mileage may vary.
Posted by PeterAmthor at 1:45 PM No comments: