Back in the original days of Magic the Gathering some of common cards were quite good.  Some becoming staples in decks almost as soon as they came out or becoming more sought after than some rares.  This led to a common phrase "Common cards and common sense".  Basically telling people not to get wrapped up in chasing the rare cards for your decks and instead looking at what you have plenty of how they can work really well for you.

So I'm going to try to follow up with that a bit with some common cards worth using in Commander that get overlooked by many. 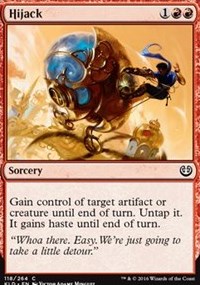 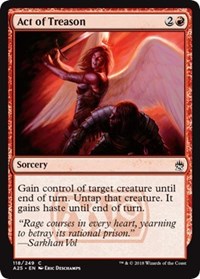 Let's look at something wonderful for people who like red.  Hijack is a card most people have but never use (or Act of Treason, Traitorous Blood, Traitorous Instinct, etc. as it gets reprinted with slight differences and name changes often).  The simple basics, you take control of an opponents creature until end of the turn and it has haste.  Now why this may not seem like a lot of awesomeness at first glance it is something to hold onto until later in the game.

Don't blow these cards on something small. Somebody always seems to go Voltron and pumping up a creature into a real ass beater.  Laying down devastation every chance they get.  So grabbing that which somebody else has spent a lot of time and mana on and swatting them (or somebody else) with it for only a handful of mana is a really good feeling. Especially if you've been playing many red right and your opponents have their life already knocked down a bit.

I've won games by suddenly dropping one of these cards and suddenly taking out the very person who was about to take the win by ousting me. Nothing like seeing their face when they are suddenly snatching defeat with what they thought was their victory.

Some not so common cards that work well are any cards that let you sack a creature (hello Ashnods Altar) to toss their big bad into the graveyard or Willbreaker and take them permanently.

Posted by PeterAmthor at 3:50 PM No comments:

Mana Screwed - Not Magic but good news for another old CCG 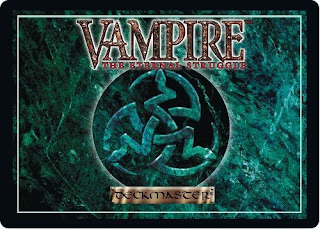 I've had several other CCGs besides Magic that I have loved.  Doomtown for it's crazy set up and setting.  Kult for some amazingly simple, elegant design that tested the most skilled card floppers tactical skill.  Legend of the Five Rings for taking unique, at the time, methods of card mechanics.  Then there is the granddaddy of all multiplayer games, the one that does it the best.  Vampire the Eternal Struggle, originally released by WotC as 'Jyhad'.

Now thanks to Black Chantry Productions it's back.  Just not in collectible form.  They are going the route of Print on Demand through One Book Shelf on their Storytellers Vault/DriveThruRPG sites.

First up is the Lost Kindred Bundle which is the first run of actual new cards.  While the number of new cards isn't many they do give you full playsets for most of the Library cards.

Also coming out are Keepers of Tradition Reprint Bundle 1 and Keepers of Tradition Reprint Bundle 2 which are reprints of the last two micro expansions for the card game.  Which, from what I hear, were hard to come by at release.  These two are heavy on the Crypt side and don't seem to have full playsets of the Library cards... which is not a good thing.

While I am quite hopeful that this helps revive the game to some level there are some issues.  There so far isn't a 'new player' option of getting into the game expect tracking down a bunch of the older cards.  Something badly needed for this would be premade starter decks.  Even if just a handful it would make it much easier to bring somebody new into the fold without telling them to go hit up ebay or dig through a local game shops dead CCG boxes.

Eventually I hope to pick up the Lost Kindred Bundle and give a full review.  But that may be a while as I have a lot of other things on my 'want to get list'. But if anybody else gets ahold of them and wants to give their opinion feel free.  Heck post your thoughts or a link to your post about the new stuff.
Posted by PeterAmthor at 10:20 PM No comments: