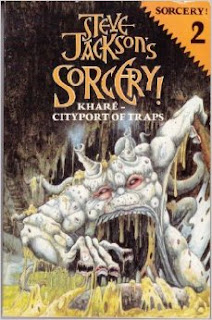 Received some of the old Steve Jackson fighting fantasy books for Christmas.  Namely the first two books out of the Sorcery! series (which I once owned all of but lost them many years ago).  Going through the system provided I got some ideas.  Decided to toss together my own fantasy rpg system using it as the base inspiration  and adding a bit more on top.  That extra bit is necessary, I feel, to help it make the step from a solitaire adventure game to an actual system good for roleplaying.

Here are my brainstorming ideas that I sat down and came up with in a couple of minutes.  No really hard numbers or anything.  Just laying out the basic direction I want to take it.

General Skill are misc non-combat related skill your character happens to know. Roll 2D6, add your skill and compare to target number. If under you fail, if over you succeed and if you match you succeed with exceptional results.

Fighting Skills, roll 2D6, add your skill and compare to opponents roll. If under you get hit, if over you hit them, if a match no damage to either. A roll of box cars is a critical hit and does double damage. There are three types of fighting skills; Melee, Brawling and Missile. Use of any hand held weapon is covered by Melee. Brawling covers any kind of battling while using your bare hands as the direct weapon. Missile is for bows, crossbows and thrown weapons.

Luck or Faith, player chooses one to believe in. Luck allows you various chances to increase your odds of success on rolls and alter the outcome of unfolding events. Faith allows your character to use Cleric abilities and is used to determine their success.

Intelligence works like General Skills for figuring out riddles, puzzles, etc. It is also used by magic users to cast their spells.

Stamina is a characters ability to take damage. You lose it by taking damage in combat, falling, etc and recover it at one point per day or by magical means.

Faith when being used for Cleric and Holy abilities. Each ability has a minimum Faith rating necessary to attempt to use it and a target number that must be reached on a test. Roll 2D6 and add your Faith score, if you roll over you succeed if you roll under you fail and subtract one point from your Faith rating. Recovering Faith is not easy and requires much from a character. These abilities are activated with a short prayer.

Luck can be spent on rolls before they are made. You may add a point to your total number to increase your chance of success, however if you fail you subtract a point from your total Luck. These points are very difficult to recover.