Pick of the Month - Citybooks from Flying Buffalo. 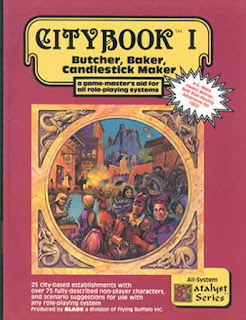 The Citybooks from Flying Buffalo Games.  These are some of the gems that were released for that company back 'in the day'.  Each one packed with locations, NPCS, adventure hooks and all sorts of goodness.  All set up to be generic and easily dropped into any pre-existing fantasy campaign or system.  I always thought they were well worth it to help add some depth without having to spend a lot of time writing up your own info.

Also be sure to check out what else Flying Buffalo has to offer.  They put out some really old school greatness... along with some not so great releases.  But one thing is for sure, it was always fun.

Posted by PeterAmthor at 5:34 PM No comments: 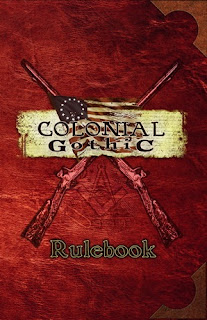 So recently I've started playing in a game of Colonial Gothic at a local game shop.  The GM is running first edition of the game because that's what he has.  So my thoughts on the system and whatnot may be about things that are fixed in later editions.  Also this is the first time the GM has ever ran it using the system the game shipped with, he's ran the setting before using his own homebrew a while back.  This makes it a case of learning the mechanics with the players.

Anyways, my thoughts on it so far.

Setting wise I love it.  Colonial America with a very nice horror bent to the whole thing.  Cultists, old school vampires, demons, so much goodness.  For anyone that likes a little history with their gaming this should scratch that itch rather nicely.

Character generation was a bit odd.  The book seemed to need an editor something fierce as there were references back to stats that weren't there or likely renamed at some point.  So we had some "I guess they mean this as its most like that." going on.  Skill purchasing was a little clunky and could have been easily streamlines a bit with less work involved.  However I do like that you end up with a small batch of usually broad skills.

The Fate cards will prove interesting... or not, once we get into play a bit more.  I like the idea behind them and how they can help steer the game story wise.  Same goes for the Faith points and their ability to edit scenes for the players benefit.  Both could really make the game a lot more fun if utilized correctly and not forgotten about.

Now combat proved to be entertaining.  Especially where the amount you succeed by directly influences the amount of damage you do.  So we had some fights with many misses and tiny hits that suddenly jumped out with a few huge swathes of damage that surprised everyone.  It really helped give it that cinematic feel that I think they were going for.

Now skills work under the same rough system as the combat.  So you end up with many failures especially with new characters it seems.  But I've seen far worse examples of this from other more popular games.

So this is my opinion and thoughts so far.  I'll be posting up more about it every two weeks as we get more experience with the game.

Also be sure to check out my other posts on my blog.  Some snark, some randomness, some useful stuff from time to time.

Posted by PeterAmthor at 10:13 AM No comments:

You've probably seen this statement around on a few articles.

"I played Dungeons and Dragons before it was cool."

Hey guess what, everyone is still playing Dungeons and Dragons before it is cool.
Posted by PeterAmthor at 1:00 PM 2 comments:

Dickheads in the community of this hobby aren't a new thing.  I've known this for year.  So for those who look with rose colored glasses to the past all I can say is you are morons.  Proof to my point are things like this. 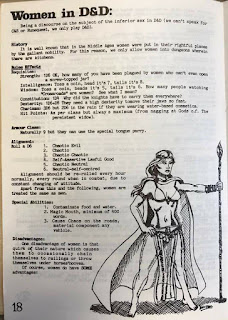 So there are dickheads everywhere and through every stretch of time in our hobby.  Just now days they seem to have a lot easier way of reaching more people thanks to this fabulous fuck up and step backwards we call 'social networks'.  But ah well.  As long as we can all agree that there are dickheads and many don't get that they are dickheads then we understand each other.

Posted by PeterAmthor at 12:37 PM No comments:

Maybe one day a new edition of Kult will come out with system that isn't dogs vomit like Powered by the Apocalypse.  Maybe one day they'll make an affordable version of Unknown Armies 3rd edition so us not so well off gamers can afford it.  Maybe one day I will crowned king of England.

Maybe it's time I moved on from the hobby.

I mean seriously everything that I have looked forward to for the last four or five years has ended in trash.  To the point I don't even bother to look at what is coming out... ever.  After all it has led to disappointment or excitement followed shortly by disappointment.  Especially since all the rage seems to be 'bigger and more expensive, it's great!' or fueled by a popular system that I can't stand at all.

The only thing that has kept me here is nostalgia of the way it used to be.  How fun gaming was.  Not like now where it's like pulling fucking teeth to get people to show to play.  Or where I set for hours waiting for a game to start when all anybody ends up doing is sitting and talking the entire time.
Posted by PeterAmthor at 9:57 PM No comments:

Time to move some shit out.  Shit that I will most likely never play or run again.  Which, hell, I'm not sure if I'll run or play much of anything in the foreseeable future up until the time of my death.  You know what I'm saying?

Hitting that sales block will likely be all my Sla Industries stuff.  Bit done with the game you know.  That and what little I wasn't done with it the owners of the property and Daruma have pretty much ground into the dirt.  I mean they FINALLY do lots of really cool detailed artwork of armor, weapons, gear, creatures, etc.... BUT they are only going to release that art in the miniature game rules not in any sort of RPG release.

I mean really what the fuck?  I've seen a complaint that the RPG wasn't making that much money.  They failed to mention they haven't made any real attempt to support the RPG in near a decade now.  Or that something everybody has been asking for (that cool art work stuff up above) they never attempted to do until the miniature game company came along.

Posted by PeterAmthor at 10:02 PM No comments: