Cash Strapped - a trio of suggestions

This week on Cash Strapped I offer up a trio of links.  Two of which are more old school and the other to a game that has roots in both traditional and newer age style of play.

So without further ado here we go.

Adventures in Filbar. A rather large collection of products for OSR style games, mostly adventures which are color coded by party level. The average cost is pretty cheap plus they have several free ones for you to look at before you invest in others.

CC1 Creature Compendium. Hey who doesn't need more monsters to throw at your players on game night?  Here is nice selection to pull from at the low cost of zero, all stated out for OSR play.

Soulbound: Dark Industrial Fantasy. A game about wielding randomly generated, arcane weapons which are bound to one's spirit. It is set in the golden age of invention, a time plagued by giant fauna and corrupted demigods. As hunters of the inhuman it is your duty to slay these beasts. 360 pages of rpg all for the price of pay what you want.

Please check out my other Cash Strapped posts on my blog for more free, cheap and discount resources for those gamers who don't have a lot of money to spend.
Posted by PeterAmthor at 11:30 AM No comments:

This time I'm making a prediction.

Cortex Prime is going to crash and burn in the format they are switching over too.

In a recent announcement from Cam Banks the rights to the Cortex system are being sold to Fandom which does D&D Beyond. Their plans are apparently to follow that same release format. No pdf sales but instead you use an app to access all the material. Also no mention of actual dead tree formats either. The only pdfs they are releasing is to meet the requirements of the Cortex Prime Kickstarter backers. After than anybody new will have to download an app to get access.

Didn't Iron Kingdoms try that once upon a time? If I'm not mistaken that crashed and burned as well.

I think the only reason DnD Beyond is successful is because of the sheer size of the fanbase. Cortex does not have anything near that.

Nobody wants to be restricted to access through an app program that they really don't have any control over. There are several different pdf reasons out there for a reason, because people like variety when they view things. Also they like to pull open the book without having to be connected to the internet.

They are going in the opposite direction of user friendly. It will hammer the accessibility of the system and people will go elsewhere. ALSO when you make things harder to access it just drums up more piracy of your product. Look at Palladium Books, people were pirating the hell out of their stuff when they refused to release pdfs.

Anyways once the full release via their app comes out and it's the only way to get the game it will drop in popularity like a rock. Very few new people will be coming in and those who are fans are going to drop it because of the app access. Then they will finally break down and release pdfs again just to keep the line feasible. Hopefully it will be salvageable at that point.
Posted by PeterAmthor at 4:14 PM 1 comment:

How about a nice little collection of various gaming aids for GM's and players alike. Just take a look at what you can use here as there might be the diamond in the rough you've been waiting for. Not so much of a theme this month but a nice bit of variety instead.

Please check out my other Cash Strapped posts on my blog for more free, cheap and discount resources for those gamers who don't have a lot of money to spend.
Posted by PeterAmthor at 8:11 AM No comments:

Okay it's been a really funny few days in the old online gaming communities. Monte Cook Games released a pdf called 'Consent in Gaming' and suddenly a bunch of fucking monkeys began throwing feces so fast it looked like a literal shit storm. Everybody from Tarnowski's little gathering of antisocial misfits to folks deep in the OSR movement were up in arms. I've never seen so many morons crying out how this was going to ruin gaming or that it's something the SJW folks are pushing on all of us to invade the hobby. I mean some really, REALLY, stupid shit was coming out of folks.

I never bothered reading the Consent in Gaming thing because... well because it came from Monte Cook Games and I don't ever bother to read anything they put out. But I got the general idea of it from between the screeching of angry basement boys. Really I don't see the need in using it because I do this wild crazy ass idea I call "talking to my players about the type of game I'm going to run beforehand" that has always worked really well for me.

But I did thing of an alternative that I think would work better. Instead of the players filling it out and the GM having to filter through five or six different peoples issues ON TOP of all the regular work they have to put into into a game.  Let's have the GM fill out a form which shows what kind of topics and issues will be in their game and then the players can read it and chose if they want to play or not. So the GM can run the kind of game they want and get the types of players who are okay with it while players can find the games they are suited for much easier as well.

I call this wild ass idea "Being up front with players on what your game is about". 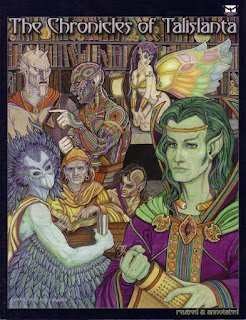 Oh the classic world of Talislanta. Those of you old enough to remember probably think of the 'no elves' ads from back in the day when hearing that name. Probably one of the more unique settings of the old school era of game design. It bounced through several publishers, multiple books for it have been released and even multiple systems. A busy few decades for a RPG that never quite broke out onto the map for many gamers.

But now it's back in the hands of the original creator and he's decided to give away all the old material for free. Or you can even get Print on Demand version of the books through DrivethruRPG.

Visit the main website of www.talislanta.com for a good chunk of history and information about the game. Along with links to downloading all the books you could ever want for it.

Or go to the DrivethruRPG section for Talislanta and get the free downloads there or order physical copies of the books.

Please check out my other Cash Strapped posts on my blog for more free, cheap and discount resources for those gamers who don't have a lot of money to spend.
Posted by PeterAmthor at 11:00 AM No comments: 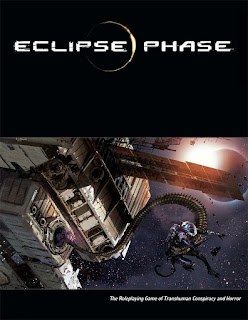 Thanks to Robert Kosten for pointing out that Eclipse Phase offers their first edition core book and tons of supplements for free. For those that don't know this game is an amazing transhuman scifi setting that captures a lot of unique elements and rolls them all into one. Highly recommended.

You can find the free downloads at this official blog for Rob Boyle.

Also be sure to check out the official Eclipse Phase website.

Plus you can find all their products up on the Posthuman Human Studios LLC page on DrivethruRPG.

Please check out my other Cash Strapped posts on my blog for more free, cheap and discount resources for those gamers who don't have a lot of money to spend.
Posted by PeterAmthor at 11:30 AM No comments: