Starting August first this blog will be getting a little bit busy.  I've decided to take part in the #RPGaDAY idea and each days post will be on here.  Currently I'm writing them out ahead of time and scheduling them to go up at 10:30 AM each day.  Got up to number ten done and I'm still moving on ahead.  Not sure if I'll be linking to them every day from my G+, Facebook and Twitter accounts though.  But I will be for some of the more interesting days.

Also I would like to link to blogs that are going to be participating in this as well.  So if you are one of those shot me a link either in the comments to this post or to me via one of the social networks I'm on.  I'll compile a list and make a post linking to them all the day before it all starts.  Then as the month goes along I'll add in links to blogs I discover.  Hopefully this will help others out with a 'Who is participating? Go here!" sort of thing. 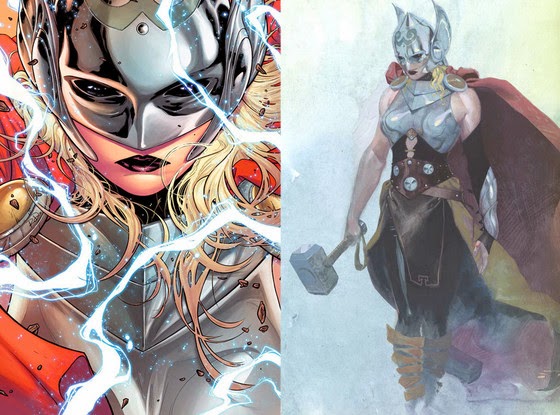 I've never seen so many people who have never read comics getting all upset about changes taking place in the storylines now. As a person who has read comics for years I'm stunned by what the hell they are throwing a fit over.  Really?  Changes?  Lets talk about the outrage and changes.

Outrage over The Falcon taking on the role of Captain America after Steve gets the super soldier serum in him removed by a bad guy.  Okay lets see. Caps been dead a few times, replaced in a major fashion at least twice that I can remember, been a vigilante all sorts of other stuff.

Outrage over a female taking the mantle of Thor.  Thor does something wrong and looses the right to wield the hammer, a female (probably asgardian) picks it up and carries on the fight.  Okay Thor has been a freaking frog before, replaced once that I can remember, been unable to heal wounds and had special 'Iron Man' arm armor for a broken arm, I think he's died as well.

Outrage over Iron Man making a new all silver armor suit and moving operations to San Francisco.  Tony Stark has had more armor styles than most folks have underwear, has been and alcoholic, paralyzed from the waste down, been replaced as Iron Man by Rhodey, not sure if he's been dead for more than an issues, not to mention turning back and forth from a nice guy to a total ass an uncountable number of times, lost his company to Stane, hell the list could go on for him.

People these are storylines, not permanent by the gods changes to the characters.  Just like Superman getting killed or being split into read and blue personalities.  Crazy stuff happens, it's what they use for a while to go some new directions and then things eventually go back to normal.  "Oh no they're changing the characters!"... no dumbass they are off on a new storyline for a while.  Get the hell over it, things will go back and then they'll change again.  Otherwise the comics would get really boring as hell after a while.
Posted by PeterAmthor at 2:10 PM No comments: 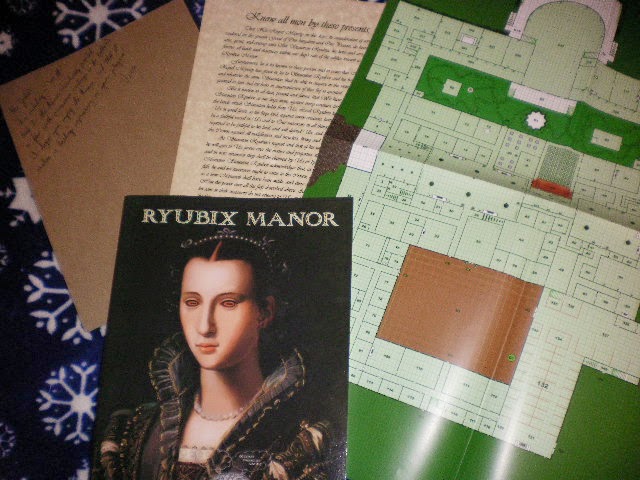 Available in PDF at DriveThruRPG here -  RYUBIX MANOR in PDF

Fresh from a properly ran and delivered Kickstarter we have the Ryubix Manor fantasy adventure. Billed as system agnostic and useable for most fantasy games (although I think it has a distinct DnD and old school feel). While it looks like a mega-dungeon it is more of a mega-location that is done right. Lets go into a few details.

It has a nice back history that makes it rather easy to drop into any ongoing campaign if need be. A manor built quite some time ago by the Ryubix family, three brothers who took care of those around them and were a positive influence on the area. Generations go by and each time the family line gets darker and darker until finally a curse is dropped upon both the surviving family members and the manor itself. A century later the players either acquire the deed to the manor from the last known surviving person of the family line, or are hired by him to clean it out.

All the necessary NPC's are given some detailed descriptions but are presented pretty much statless. You get a pretty rough idea of their power level with the level and class description following their names (ex. Vampire/ 15th Level Bard). The monsters are presented without stat blocks as well with just a Hit Dice rating. The author told me this is because most GM's already have the monster manuals with everything they need in them, no need to reprint them all here, raise the page count and thus the cost of the book. For those who may not have them Second Thought Games have provided the necessary stats in pdf format on their website in both Pathfinder and 3.5 D20 OGL.

The manor is bloody huge. 325 detailed areas to be exact along with details on the immediate surrounding areas and even the roof of the building. The map that comes with the book is double sided, very sturdy and well detailed. Even then not all of the areas are able to fit on it as the underground sections are in the book. It is big, very big.

But the one of the nice things is the layout all makes sense. It is laid out like a massive manor, known in the past for having balls and frequent important visitors, should be. Luxury and ease of living, along with catacombs for the burial of family members, cellars where there are storage areas for things they really would have needed to store things in. There are no random layouts in this place, no 'what the hell was this place before it became a monster filled dungeon' vibes at all.

While I haven't had a chance to run this I have heard from a few playtesters and got to read a bit of the feedback from them. It's a challenge but something that can be accomplished, so no cake walk but no useless fight with no hope of winning either. Very solid adventure that holds up to what most players can dish out.

Finally the layout and presentation is very simply. Going for more ease of use and substance than style and fancy design. It is clear, decently illustrated with no layout errors or missing sections that I have noticed. This alone gives it a bit of an old school feel, back before everyone thought things should have every bell and whistle they could push into it.

In the end this is a very well done adventure. Pretty much geared for higher level players but it is scalable so it can fit a good range of levels. The book and map are both well made and should hold together for lots of play. Second Thought Games has come out the gate with a good showing for their first offering. If their next two announced books hold up as well then people should really start to take some notice.

Tabletop RPG Kickstarters - Things to do part one.

Having sat back and watched many Kickstarters for RPGs go down in flames, barely managed to meet some level of success and a few even slam out the door with flying colors one notices a few things. When you look at the failures it becomes quite easy to see what the problems were from the start and then the successes show you what they did right. This short article series is a look at what I have seen work time and time again. Not all of these are exclusive to being necessary getting your game out the door, but more often than not they do help a lot. Especially for those who don't have a lot of experience in the actual handling printers, layouts, etc; basically this is some of the advice that is best suited for amateurs who want to get a solid start.

First and foremost I will cover the number one thing that needs to be done before you even start working on your Kickstarter page. Write the damn thing first. If you evidently feel you can only write under the motivation that people have already paid you then this probably isn't the line of work for you. Having the dedication before hand to write it all out shows that you can actually do something.

I've seen more updates saying “I've hit a bit of writers block” or “Really having some trouble coming up with detailed descriptions for the NPCs” and other such stuff. That or the promised page count being an almost unreachable goal once they start hammering out words. People who only have experience writing blog posts or short little bits on their web pages find out the hard way that writing out a full game book is a very different animal indeed.

Also having everything written out gives you something to offer up to backers as a showing that you can get it done. Some have offered up the full text of a game book to backers at every level, others have offered sections like combat, character creation, etc. This also gives you the added bonus that your backers may spot something you missed. From things spelled wrong, sentences that simply don't come across right and even some playtest results if you offer up the full rules. The Fate Core book did this with some amazing results.

So if you want to put your game out via Kickstarter then the first thing you need to do is write it. Stop reading these articles and then come back when you have it done. Again this doesn't always apply to everyone, professionals who are already adept at getting things done on a set timescale may be able to do the work after the funding. But for anybody else....

As a side note THIS is precisely the reason I have never tried a Kickstarter.  I've got a half dozen or so half baked games part of the way written.  Nothing finished and I know that under the crunch of time I may not be able to deliver.  I just wish a few others would realize this as well.

Posted by PeterAmthor at 8:34 PM No comments: