A new video game review is up on Truly Rural. This time our resident video game addict Jay takes on Aliens: Colonial Marines. He comes with a few acid burns, slighty charred around the edges and ready to write this one. Also for those who don't know Jay this would mark Jays eleventh review for Truly Rural so far so be sure to check out a few of the others.

You may not agree with everything he says or the games he hates/likes. But at least he's honest about his opinions. Unlike many other review sites who evidently rate games based on how much advertising they buy there.

Posted by PeterAmthor at 4:45 PM No comments:

GM Advice - Let the players get to the adventure

“All right you are all in full battle dress power armor with weapons stowed and belted into the drop pods. They fire out of the ship like a bullet, hammering you back into the cushioning. As they pass into the atmosphere your teeth rattle as everything shakes and bucks. Suddenly warning lights come on; you are getting fired upon by anti aircraft weapons in an attempt to keep you from reaching the ground. I’ll roll once for each pod and if they are hit by the incoming rounds then it’s game over for them.”

“You mean for the NPC’s that are coming down with us right?”


“No for every pod, including the PC’s.”


“If we’re hit then we get a chance to pull out of it and make it though right?”


Have you ever been in a situation like this in a game? Have you ever put this situation upon your players in a game? In case you haven’t noticed it’s not exactly a fair thing and not really fun for the players. After all they’ve gone through all the trouble of generating characters and then suddenly BAM they may be killed off in a die roll that they can’t affect and usually before they get to do anything much.

The usual argument back from the GM is ‘But that’s the way life is!’ Yeah well this isn’t life we are playing is it. If all we wanted was life we would walk downtown for a while and shoot some pool. But we’re not, we’re playing a game and a game is supposed to be fun. That means fun for everybody. This responsibility is in the hands of everyone playing but it’s all under the control of one person.


For the direction he takes the game and the obstacles he puts into the way are what makes everything work. He just needs to be aware of the way the players want to take the game and make it work for them as well. This is a little fact that is often overlooked by many GMs.


First thing off he needs to let the players get to the adventure. What is the point of all your planning ahead if nobody gets to fight their way through it? There doesn't need to be any 'roll against instant death' within the first few minutes of any game because then there is no point for people to waste time making characters. In the above situation, yes it's dangerous, yes if it were real anybody could be killed in an instant. Do kill off an NPC or two especially if you built up a bit on them so the players like that NPC. Make a point that it's going to be a rough game but at least let them make it to the damn game.


People joke about how you can die during character creation in the original Traveler rules. Don't become a joke yourself by killing off characters as soon as they hit the table.
Posted by PeterAmthor at 12:00 PM 2 comments:

This is the short review I did of Teratic Tome that rpg.net rejected for being to short.  Just a quick note I am not that good at writing reviews for game products.  I do much better at writing reviews for static media such as a movie.  But this book deserves a review if you ask me.  So here it is... in rpg.net stats I gave it a five in both style and substance.

Oh you can find the book on drivethrurpg for the cost of Pay What You Want.
Or pick it up in print over on Amazon. 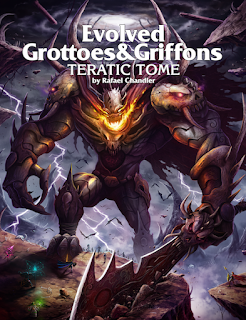 The Teratic Tome is a monster manual for the not yet existing game setting “Evolved Grottoes & Griffins”, I say not yet because there is some hints from the author lately that it may become a reality. It is set up using the OSR rules set known as OSRIC and it compatible with the older version of Advanced Dungeons & Dragons. Therefore giving it some double usage among various groups.

Style. The book is set up to look like another edition to the old AD&D Monster Manual series. That was the established goal by the writer and one thing is for sure he has hit the bulls-eye. The layout inside matches up completely, monster descriptions and stat blocks. Even the fonts used on the cover make it fit right in beside those old classic books. It's a nice breath of fresh air to see somebody avoid all the modern layout designs and going back to something that just flat out works. The simplicity of it really sets it apart.

The artwork inside is a mix from various different artists. Some of it is highly detailed and breathtaking, others not so much. But even the blend of good and not so good seems to give it that old school feel. Not everything got the top knotch art treatment even if the monster described dearly deserved it.

Substance. Now here is where the book really departs from the old standards. The creatures lurking within these pages are of more horrific nature than what the original Monster Manuals were known for. Again this is done quite on purpose as the back cover blurb clearly mentions. This is the nightmare fuel for adventurers, the things they don't want to talk about when they walk away from the dungeons. Horrors that aren't boasted about in tales of glory but mentioned in low hushes in the crowded corners of taverns when the survivors are finally drunk enough to speak of them.

Some of these are new takes on old monsters. Like the Alpha Hell Hound, Daedal Minotaur and the Gelatinous Pyramid. Others are quite original with their influences seeming to come from horror stories drenched in blood and suffering. You get a full serving of variety in this book and many of them quite unsettling.

In the end I can't recommend this book enough. I don't use OSRIC or AD&D to run anything. But I will be using this as a source for encounters in other games that I run. Quite a collection of inspirational creatures for any game masters arsenal.
Posted by PeterAmthor at 7:32 PM 4 comments:

Well it's all over the web in nearly every gaming circle that I've seen.  Games Workshop is trying to copyright the name 'Space Marines'.  This could prove very interesting as other parties have released gaming material under that same name before.  Including an old Fantasy Games Unlimited rpg actually titled 'Space Marines' that came out before Games Workshop ever used the term.

I also remember Games Workshop giving John Wick trouble for how he spelled 'Ork' in his rpg 'Orkworld'.

So now I'm encouraged.  Encouraged to write up a little eight to ten page free rpg and call it Space Marines.  Put it up for free as a download off my site and any other site that wants to host it.  Maybe even make an expansion with miniature rules in it.  May just have to work on that....
Posted by PeterAmthor at 7:21 PM No comments: 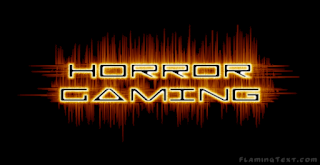 Cults are a nice source of bad guys in most game settings. You can toss them into just about anything with a little work and thus create a small network of like minded individuals that the characters have to deal with. However I do see one thing that a lot of folks do that just doesn't make much sense to me. When they go and name this group they call it the 'Cult of whatever' or some such. Even the NPCs call it by that name. Personally I don't see a lot of groups coming out and saying “Hey look at us! We are a cult!”.   Cults have a negative connotation attached to them. Just hearing the word 'cult' and people start to think of bad things done in secret places for even worse reasons. Now why that may actually be what your fictional cult does, they wouldn't want everybody knowing about it. Give them a name that seems a bit more innocent but still adds that bit of mystery. An especially useful thing to do is chose something that ties into an already existing established religion. Then they may simply be thought of as being a different demoniacal of that. Mostly just like all the rest with a few small differences. A few good words to use would be: Order, Sect, Following of, Chapter, Body or Clan. All of these tone down that immediate thoughts of bad reputation a few notches. They also won't make the characters as nervous about them right off the bat.   Now again they probably don't go around advertising themselves either. So this isn't a name they are going to be hanging on a shingle out in front of their homes. After all if they really weren't a cult of baddies then they wouldn't actually be that useful would they? Therefore keeping their group hidden even among the locals would be of importance also. Only when they feel they are talking to a likely recruit or potential ally would they reveal who they are. Even then they would probably sugar coat their activities and beliefs. Then urging the person they intrusted with the information to keep it secret as well.