Okay so the new edition of Kult is coming sometime soon.  Given the full title of 'Kult Divinity Lost' and supposedly being done by folks who are long time fans of the game.  For those who don't know I'm a long time fan of Kult and, up until recently, owned everything released for it in English.  So hearing that a new edition was in the works I was excited, hearing it would have a different system had me even more interested.  So I was doing the fan boy dance.

Then they said it would be using the Apocalypse World system.  My hands went into the air as I said 'fuck that' and walked away.  You see I cannot fucking stand Apoc World at all.  So I'm figuring why the hell would I buy a fourth edition of a game with a system I will never ever use and will get aggravated everytime I flip through the book.  Already own the setting three times over and they are setting on my shelf.  Do I really need a fourth copy of that setting?  Hell no.

Let's go on to a bit we've heard from the new folks in charge of the game:

"When I play KULT: Divinity Lost, I want the rules to fade into the background. The number one rule during development is that all rules must support the ongoing immersive story, instead of breaking the flow or draw attention away from the story."

Rules to fade into the background, like they aren't there.  I can get that, the old rules were a child of the early nineties clinging onto some of the eighties train of thought when it comes to games.  But now let's read a bit they give as an example of the new rules.

"Investigate
When you investigate something roll +Intellect. On a success, you get all open clues. (15+) In addition, ask 2 questions from the list below. (10-14) Ask 1 question, but information comes at a cost. The narrator decides: You need someone or something to get all answers, you have put yourself in danger, or have sacrificed time or resources. (-9) You get to ask 1 question anyway, but you expose yourself to dangers or costs. The narrator make a soft or hard move.
Questions:
• How can I find more information about the object of the investigation?
• What do my gut say about the object of the investigation?
• Is there something weird about the object of the investigation?"
The basic moves includes skills and abilities that the characters in KULT: Divinity Lost use when confronted by the world, and to defeat obstacles in their way. All are built in the same way with an activation phrase, roll, and effects.
The activation phrase tell the players what actions in the story that can activate the move. For example, “When you investigate something” means that the player can roll for the move when the character investigates something, and if the narrator agrees that a roll is needed. Perhaps there is nothing to be found or that clues are so obvious that it isn’t necessary to roll dice, or that the situation does not lend itself for investigation—such as in the middle of a fight. In KULT: Divinity Lost, it is always the Narrator that decides if dice are rolled or not."

How in holy fuck is that 'fade into the background' style of rules.  It's A.W. style limiting what you can do and requiring an 'activation phrase' crap in my opinion.  Yes because dark horror roleplaying activation phrases are so the thing needed to keep the mood going.  Applying the latest "indie darling" system has me turning my back on the game after decades.

Well turning my back on most of it.  Seeing the direction they're going I've decided to start culling down my collection.  In the end I'll probably keep the first edition books and the rest will eventually be heading towards ebay at some point.
Posted by PeterAmthor at 5:07 PM 1 comment:

Print plus pdf thoughts on pricing

Just wondering what about the opinions of other folks on the pricing of print + pdf bundles when buying off of Drivethru/RPGNow. Should the pdf be discounted by a large margin since you are paying out for the move expensive dead tree version as well? I know that ultimately it comes down to the decision of the publisher and what they want, but what do the consumers think about this?

Some offer zero discount like the HARP corebook from Guild Companion Publications.

While some of the newer small press games toss in the pdf for free as on Alpha Blue.

Many established very successful companies do give a bit of a discount such as the 'How Do You Do That' for the Mage 20th Anniversary edition.

And other companies that are no longer big fish in the pond offer the pdf with a deep discount with the print copy like Cyberpunk and Castle Falkenstien from R. Talsorian.

So what do most of you think, should it be given at a discount, and if yes then by how much? Not to mention the idea that some of those products offered have been out for decades and there is no overhead for production costs. Just give me your two cents please. 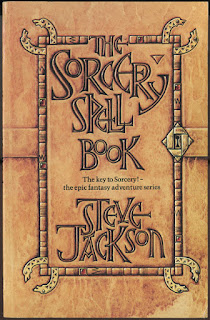 Getting ready to do a playtest for my simple fantasy system this coming Saturday.  So I through together a quick list of spells for the magic user types.  Instead of DnD 'fire and forget' type of magic I'm using a system that costs the caster stamina points.  So the more they cast the weaker they get and more liable to be taken out in combat.  Also spell casting requires a roll for them to work, but there are two difficulties, one for doing it from a spell book and the other by casting them from memory.  Finally each spell has a necessary object that the magic user has to have in hand in order to cast the spell as well.

Here is the short list I made for the very first playtest.  I'm sure it will get lots of modifications from feedback and all that.


For the next two minutes the caster can see all magical items and effects within 60' of themselves. They show up with a faint blue glow around the object or something altered to look different with magic will appear as it normally does.


Cast upon an object which will cause it glow with light. With a fifteen foot radius and it lasts for two hours. Can be cast on any object so it can be used to create the magical equivalent of a torch. Also it emits no heat so a heavy cloth can be used to cover the light.


The caster points at a target while casting and inflicts two points of damage to them. This damage goes through cloth and leather armor with no soak. However those with chain or plate can make soaks as usual.


Causes up to six creatures within the casters field of vision to fall asleep. If there are more than six then it affects those closest to the caster. This WILL affect friendly party members so be careful when casting. Lasts for one hour.


Same as 'Detect Magic' except it shows creatures of an evil nature shrouded in a red glow. Objects created of an evil magic will glow as well.


Same as 'Detect magic' except it causes anything invisible to show up the caster as if made from a faint green light.


Opens stuck, barred, locked, bolted or held doors. Will also unlock a secret door IF the secret door has been already discovered and the caster knows about it. Will not lift or raise gates or heavy bars that are beyond the normal size.


Creates a many layered mass of strong, sticky strands. Any one caught in the mass is stuck in it almost immediately. It takes five minutes for someone caught within to get loose, one minute if they use a sharp object to cut through. The webs are flammable and anyone caught within while they are burning suffers two points of damage each round with no armor soak. After fifteen minutes the mass turns to watery mess and is no longer sticky.


Object: A vial of sticky glue.


Cancels out all spell effects within a twenty foot radius of the caster. This lasts for two minutes but the caster may not cast any more spells during that time either. It has no effect on magical items.


Object: A pair of glasses with smoked lenses.


Same as Sleep except the targets stopped motionless in front of you and can affect up to eight creatures. While held they are aware but cannot move. They can, however, speak if the caster allows it.


Caster points at a target and a burst of lightning leaps towards them. Causes 2d6 damage, cloth and leather armor makes a normal soak, chain and plate get no soak but instead receive an additional D6 of damage. If there is another person with metal armor within a meter of the target the caster rolls a D6, on a 1 – 5 nothing else happens, on a 6 the lightning leaps to the person as if they had the spell cast at them.


Object: A small wooden wand that is burnt on one end.


Whoever has this spell cast upon them can breath underwater. This lasts for twenty four hours.


Object: A bag of small sea shells, a shell is given to anyone having the spell cast upon them.
Posted by PeterAmthor at 5:11 PM No comments: