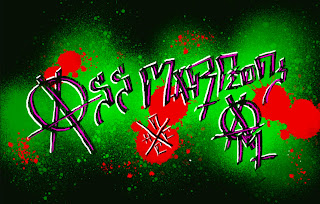 We didn't stop our Cyberpunk 2020 campaign. I just stopped writing session updates. Partly because my attention span to such things is very low and another part because when something feels like a chore it's not longer fun. Anyway, without any update on what's happened in between here is a new recap.

Johnny Silverhand blew the fuck out of Arasaka Tower while we were out of the city doing a gig. Soon as we got word of what happened we fired up the dirigible and headed back to Night City. Along the way we found out that Johnny was Soulkilled by Arasaka and many of our allies are missing or no longer able to be contacted. With Acid now clear headed and fully capable of controlling himself we now have a bit more firepower on our side.

After our band, the Ass Martians, touched back down at the warehouse we received information on where Arasaka was holding Wally's wife in a cryochamber. So we quickly put together a plan to rescue her while playing into the chaos that Night City had fallen into after the explosion. In true Rockerboy fashion we announced a 'moving concert' that goes right in front of the secret facility and invited several other bands to join in. It's amazing what you can get a crowd to do with a healthy dose of Charismatic Leadership. The guards were trying to handle fans tearing up fences and doing property damage. It wasn't long before a full scale riot took place right on their doorstep.

With that we stopped playing, let another really shitty band take over and piss of the crowd even more and went inside. Wally's father in law wanted nobody working for Arasaka to be left alive inside after we got his daughter back. So we go in with guns blazing following behind Acid and Wally as they cleared a path.

Once we were at the chambers it took my character (The Cocksucker) and Kevin's (The Butt Fucker) to get them open. I used my stolen high end Japanese chip to help read everything while he used his (also stolen high end) Cryochamber operation chip to wake them up. Once they were up and walking we rigged the whole place to blow and hauled as out of there. Moving out way through the rioting people outside as the place went up in a fireball behind us.

Wally got reunited with his wife, who has evidently also had her memories altered as well. Then we took a moment to breath before planning our next course of action.