A few years back when Rural King first opened a store here they had a large variety of bottled soda's to chose from. My wife and I took this as an opportunity for some fun and wrote up several reviews for them Doing three to four different types each time. Originally posted quite some time ago on a local Facebook page I decided to just post them up here. Some of these brands may not be available anymore. Anyways on with the quick taste test reviews. 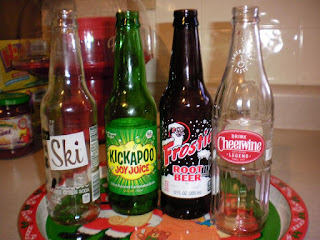 Cherry Ski. Well this was a let down. I really enjoy a good cherry flavored soda however the 'good' part just wasn't there as much. Katie thought it tasted like liquid pixie stix but not in the good way while I thought it was a bit like an unfroze freezer pop. The cherry flavor didn't pop much and while I know that most soda uses artificial flavors for cherry this one tasted really artificial. The little kid version of us may have liked it but the grown up version not so much. It's sort of a 'meh' soda, won't be picking it up again.
Kickapoo Joy Juice. A classic soda that claims to use the original recipe. I could taste the citrus in there without being a full kick like Mtn Dew or Mello Yello. However it also felt really thick as well, Katie thought it had some honey flavor which didn't mesh well with the citrus. I thought it had another flavor in there I couldn't put my finger on that didn't sit well with me. While we said it was okay and we would drink another if somebody offered it we won't be tossing it into our shopping cart on our own. Unless my eleven year old son wants some as he loves it.
Frostie Root Beer. A good straight forward root beer plain and simple. The flavor pops really well and we both think it would be perfect for a soda float root beer right up there with A&W on that. But it's doesn't have that one thing to set it apart from most other mainstream varieties in my humble opinion. But it was good and we may pick it up with some ice cream again.
Cheerwine. I included a picture of the bottle this time. It is hands down my favorite soda on the market. Less of a cherry cola and more of a cherry soda. I, and a few others, gave it much praise when I mentioned it in the last review. Evidently that had an affect because they were running really low on it at Rural King this weekend. So please, leave a bottle or two on the shelf for me.
Posted by PeterAmthor at 9:15 AM