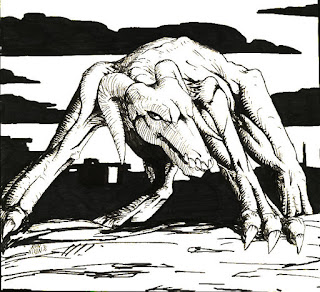 A demonic servant for Question of Faith

These servants of the Demonic forces are something to be reckoned with. They are used almost exclusively to hunt down specific targets and slaughter them... and usually anyone else who is nearby or gets in the way. Although used as a last resort as their presence is hard to miss once they are on the attack and it becomes obvious there is Demonic involvement.

These hulking skull faced beasts stand four feet at their shoulders. Their skin is dark and red with no hair. The bones show through as does every fold of muscle in their bodies. They breath deeply as if constantly gasping for breath. With eyes that dart back forth always watching everything around them.

These creatures have to be summoned by a demon of great power. Requiring the sacrifice of two normal untainted humans as well. The creatures are only granted one at a time and their target must be given to them when they arrive. Usually by giving the creatures something with their scent on it or of extreme value to that individual. They will then begin the hunt making their way to the victim. Once the person is dead they will normally return to the other side. However there have been instances where they have stayed and wreaked havoc for months until they are put down.

Inhuman Power. They are stronger than anything of their size and have no mercy when using that strength. Forcing their way through guards like they were nothing, ramming through barricades using their horned skull heads as battering rams. Whatever it takes.

The Scent. Once assigned a target they can feel them no matter where they are in the world and will head off in that direction. While not always in a straight line they will eventually make their way to them unless they are killed first.

They have massive claws on their feet which are sharp enough to slice through muscle and bone like it is simply butter. They use these as their main form of attack. But they have been known to ram people with their heads causing massive blunt trauma and sending the bodies flying like rag dolls. Finally they have a bite with a mouthful of jagged sharp teeth. Which they are known to stop and eat people on their way to the target from time to time.

Posted by PeterAmthor at 9:08 PM

Labels: Horror Gaming, my setting, my stuff, Question of Faith