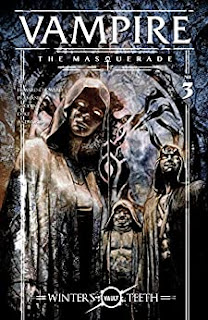 Pick it up on DrivethruComics

Pick it up on Amazon

Pick it up on Ebay

This issue hits the stand with quite a bit of action between the covers. The story picks up with Cecily's investigation into the slaughter of the Nosferatu that occurred last issue. Showcasing the brutality of what happened while bringing along her Ali whom she is still declaring as her childe. We get to see some build up, some story stings coming together and even a fight with the surreal looking bad guys who did the massacre. Don't get attached to anyone by the way. Also we discover something bad has happened to Prince Samantha while all this was going on.

The Anarch Tales secondary storyline also picks up quite a bit. We get a bit more details on one of the group members and their motivations. Then their escape from the hunters which captured most of them last issue. So it's going together nicely as well. Still wondering if this will tie into the main story or not.

In the back we get more material for the roleplaying game. Information for the Wolves in Sheeps clothing bad guys, some new powers and another group of villains called the Nictuku.

The art continues to be at the same quality standard as the previous issues. I feel the writing is maybe a little bit better than the first two issues. Still giving us necessary details for the story without dumping a ton of setting information in order to do so.

So once again, two thumbs up and recommended for fans of the new and old versions of Vampire the Masquerade. Heck even those who are not fans may enjoy this story.